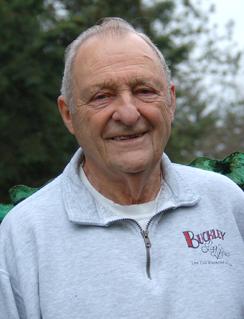 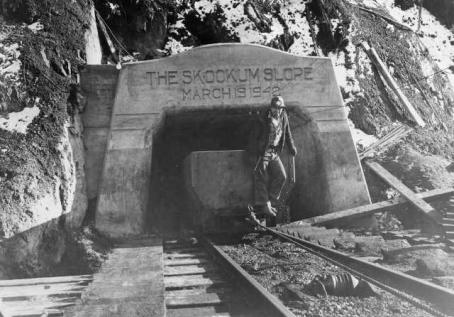 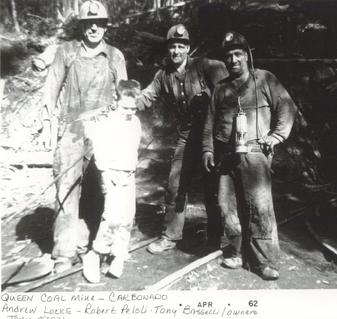 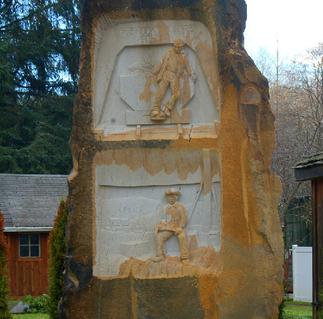 The year was 1943 and Robert Peloli was 20 years old when a photo was taken of him riding a coal car out of the portal of the Skookum Slope mine in Wilkeson WA. Robert recalls a camera man being there on that cold morning.  In many ways this photo would come to symbolize Wilkeson's coal mining era.  Robert is affectionately and factually known as the last coal miner living in Wilkeson WA.

Robert was born in  Wilkeson in 1923, the son of a Italian immigrant.  He recalls as a young boy delivering groceries to the Fairfax Hotel and residents in the now extinct nearby coal mining town of Fairfax.

As a young man Robert went to work in the Skookum Slop mine when it was opened in 1942 to provide coal for the war effort.  During his time working the Skookum Slope he recalled the perils of coal mining.  "One thing is for sure that place is full of gas", referring to the methane gas that is released in mines from coal extraction. Methane was encountered on more than one occasion in the mine.  It was one of these encounters  that Robert would not soon forget.  One morning the mine's fire boss who's job is to inspect the mine for safety prior to the men entering the mine, entered the mine for his daily routine inspection.  Suddenly the fire boss collapsed, a miner nearby realized what had a occurred.  The miner took a deep breath grabbed the fire boss and pulled him from the mine into good air.

The fire boss had been over come by gas or bad air in the mine.  Once the fire boss regained consciousness he instructed Robert to go into the other coal seam tunnels and get the men out.  All the men were sent home, when Robert asked if he to should go home, the fire boss firmly said, "No, you stay".   Robert and another miner were given the dangerous task of pumping air into the mine to clear the gas.  Robert remembers working the air hose in the mine and looking up to see an orange cloud lingering.  He asked the more experienced miner working with him what the orange cloud was, to which the miner replied, "Its the gas".  The recollection of this event ended with "If we had been using  carbide lamps in those days, there would be nothing left to find."  Robert was referring to an open flame lamp used in early mining, which most certainly would have ignited the gas causing a massive explosion.

Robert went on to serve in the United States Army Corps of Engineers in the Pacific during the war.  He returned home to Wilkeson in 1946.  A year later in 1947 he married his high school sweetheart Laurine in 1947.  In 2010 they celebrated 63 years of marriage.  Robert went on to work for the National Park Service where he spent 25 years.  During his time with the Park Service around 1960 coal came calling again.  Robert along with two partners Tony Basselli and Andrew Locke formed the Queen Coal Company.  The men sunk a mine slope 300 feet into the side of a ridge near Carbonado.   Robert and his partners operated this mine mostly on the weekends until 1972 when mine regulations made it impossible for a small operation to continue.  He recalled the day he pulled the shoring timbers from the mine collapsing it.  At 87 in 2010 he proudly quipped, "With a backhoe I could open it back up in about four hours."

​In 2009 Robert, all the miners, and quarry men were recognized and celebrated during the town of Wilkison's 100th birthday.   An 18 ton piece of sand stone from the Wilkeson Quarry depicting a miner riding a coal car coming out of the Skookum Slope mine, inspired by the 1943 photo of Robert, and a stone cutter from the quarry was erected in downtown WIlkeson near the town hall.

Last I saw Robert he was enthusiastically mowing the grounds of Wilkesons Coke Oven Park.  I stopped to say hello, within minutes we were discussing what new coal finds I had discovered in the area.

As I drove away that day I had a tremendous feeling of satisfaction and privilege having had the opportunity to know a man with a respect and understanding of the northwest's coal mining heritage second to none. 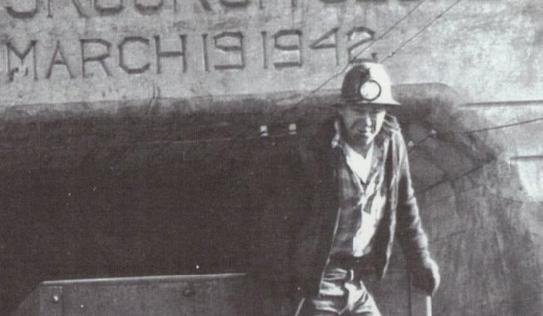